The Simpsons and How They Embiggened Me: Introduction

The Simpsons hold an interesting power over my life. While I grew up in a very strict form of Christianity (read: cult), I also had the benefit of having very young parents. Young and hip enough to enjoy and allow the Simpsons in their household but unhip enough to go to church every Saturday for what felt like hours on end.

Before the church service proper, the kids had to go to Bible class and learn how evil every other person we knew was evil. When Halloween came around, it was all about demonizing Halloween. When Christmas came around, it was all about the pagan roots and evil behind Christmas. When Easter came around, same idea. Holidays were lucky enough to be seasonal and only a target for ridicule a few weeks out of the year so my brother and I only felt guilty about celebrating Christmas with our Catholic family for a few days before and after. The Simpsons, though, were on every week on Thursday nights and, just as going to church was a ritual not to be forsook, watching the Simpsons was something that we would never forget. 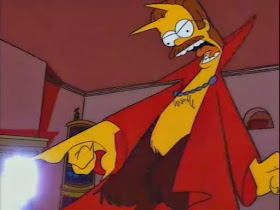 I remember one Saturday pretty clearly. It was right around Halloween and I was just getting giddy about the Simpsons Halloween Special. They were always, and still are always, the best episodes of any given season. The volunteer Bible teacher said something derogatory about Halloween and then said something about the frivolous joys of the world like the Simpsons. I can't claim to remember his exact words but it was enough to put the fear of a jealous and angry God into me (quite different than the five fingered, football watching Lord of the Simpsons).

Luckily, my brothers and I were undeterred by bullshit. The Simpsons was a duty. It was a must. Even though I wanted to be a Bart and idolized him, I knew I was more of a Lisa down to the damn saxophone. My brother was a natural Bart. He was an all-boy hell raiser but with a heart of gold. 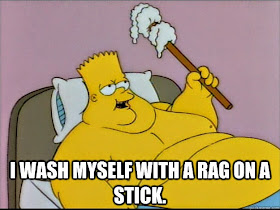 This is crazy. This is pointless. This is stupid... probably, but this all started out with a semi-drunken conversation on the porch of a friend's house. For those that know me, I like to wade into controversial conversations. I like zero-sum arguments, not because they are right or anything but what is the fun in waddling in shades of grey when you can really irritate people with a position that is firm and unwavering. Now, I always tell my friends to not let me talk about politics. This was one of those nights so I made a statement that I was sure that everyone would agree with: "The first episode of the Simpsons is the best Christmas episode of anything ever."

Some asshole responded, "What about Peanuts?"

"What are you, seventy years old? No, the Simpsons."

"What about It's A Wonderful Life?"

"Good movie but only became popular because it wasn't copyrighted and some television station found they could play it for free over and over again on Christmas eve. Simpsons."

Things got heated. Punches were thrown. Feelings were hurt.

But I left correct. That is a luxury nobody else could walk home with. I also walked home with the burning idea to start buying Simpsons DVDs and reliving my childhood. I started spending too much so I said I'd write about every episode in some capacity for each season before I can buy another. 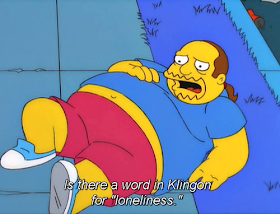 Just to clear the air here: I like Peanuts as much as any other nerd, sure. I can appreciate Calvin & Hobbes and its impact on many lives. When I was a kid, though, growing up in a religion where the Simpsons were bad but kids were allowed to enjoy and consume Peanuts and Calvin & Hobbes as wholesome alternatives, I created a bias against them. Those were comics for the goodie-goodies. Oh, well. Time has proven me wrong about them, especially about Calvin & Hobbes. Oh, well. Oh, well.
Andrew Hilbert at 9:49 PM
Share