Photos from the October readings. 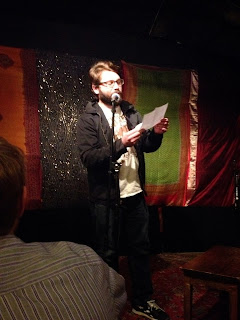 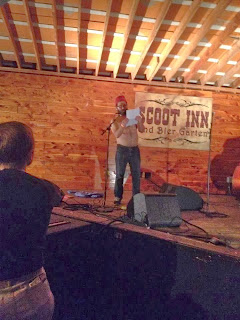 I got to show some skin at the Foxing Quarterly Wes Anderson Party at the Scoot Inn. Yee haw.
Photo: Nina Barker 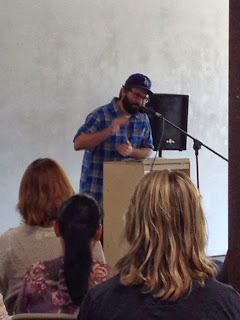 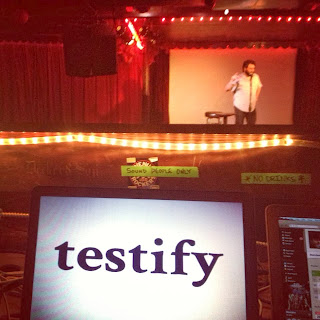 Telling a true story about getting hit by a car and dying in Aqua Socks at the Testify show at Spider House Ballroom, Austin, TX.
Photo: Abby Ronaldes 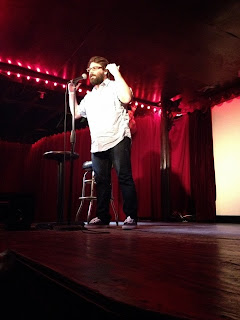 Another angle from the Testify show. My hands go nuts when I can't read from a paper.
Photo: Nina Barker

The holidays are coming and everyone needs bathroom reading material. Why not get Toilet Stories From Outer Space? Click here.
Posted by Andrew Hilbert at 12:44 PM No comments:

I've got no readings scheduled until November 7th and that one will be at a car wash.

After that, Slagdrop will finally release Slagdrop Presents America... You're Welcome! It took a long time for it all to come together but after all the hiccoughs had been hiccoughed, I am glad to say that we put out a fine piece of work.

Jack Arambula designed the cover and the back cover and helped with the layout. Many a night were spent hunched over computers and cussing. Jack and I also have a web comic series called The Weekly Weird Monthly. Check it out here.

Pat Davis did a bang-up job on the layout and has a cool art piece on the interior front cover. Maybe it'll end up being a t-shirt?

There are some fine writers in there. I'll just name a few: Scott Montgomery, Zachary Locklin, Cheryl Couture, Gerald Locklin, Clint Margrave, Ryan Sayles, April Krassner... I can go on and on. 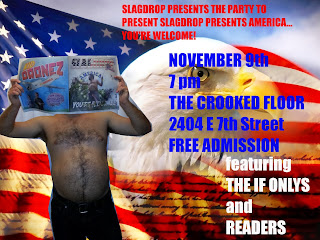 On Saturday, November 9th, meet us at the Crooked Floor to release this weirdo celebration of America. We'll have some special deals and there will be a vote on who is dressed in the most patriotic get-up. Whoever wins, wins a free magazine, a free beer, and a free Ouija board dictated letter of gratitude from a former president.

Now, on to other things.

Testify here in Austin is one hell of a show. Check out their website, check out their shows. I told a story about getting hit by a car at their last show and I had a blast. I have to say thanks to them for letting me step on their stage. I may have left a few crumbs and spilled some mustard on stage, but it was a damn honor. Abby Ronaldes is a local artist about town here - she's one of the organizers and a friend and a big thanks goes to her for allowing me to drink TWICE as much as was contractually mandated.

The Long Beach Poetry Festival in Long Beach, CA was incredible. There were a ton of fine poets, I sold a few chapbooks, met some great people. All was great. Speaking of meeting great people and fine poets, Thomas R. Thomas has a book out and you should buy it. His poetry is great. Click on his name.

The gift buying holidays are upon us, folks. I'm not trying to force you into turning my chapbook, Toilet Stories From Outer Space, into a stocking stuffer but it fits inside a stocking like a... glove. It fits into a large glove like a small stocking, too. 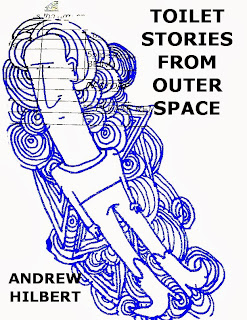 Posted by Andrew Hilbert at 4:30 PM No comments:

The past few readings I've done have been great.

Thank you kindly to the Long Beach Poetry Fest folks. I had a great time. Sold some books, made some friends.

Next up is the Testify show at the Spider House Ballroom.

Speaking of selling books, buy my new chapbook Toilet Stories From Outer Space. It's $7 which is a dollar a story, plus you get some nifty doodles and shipping is included in the price. This means it's less than $7 a story but I can't do math and you wouldn't want me to, anyway.

Posted by Andrew Hilbert at 8:59 AM No comments: