I was the critic's pick for Best Author Reading for the Austin Chronicle's Annual Best of Austin awards.

Francois Pointeau and Owen Egerton also won some literary awards and my former employer, BookPeople, continues their reign as best bookstore in Austin. We got to party for free, got a nice tshirt, drank a lot of Austin Beerworks and ate a lot of Via 313. Sometimes life's just damn good. 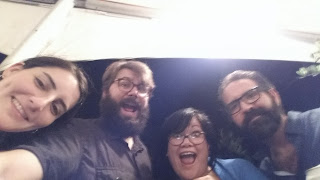 The Weekly Weird Monthly Automatons at the Austin Chronicle Party
Nina, me, Cheryl, and Chris

Austin is losing Francois Pointeau to the road soon. We sent him off at the Whip In at his book release party. It was wildly successful. I had the honor of hosting the whole thing and all I can say is that Austin got a whole lot less French. Get Francois's book by clicking here. 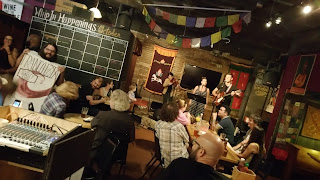 Francois as a boxed wino. The If Onlys on stage.

Death Thing is continuing to generate positive interest and I'm starting to pursue next steps career-wise. It's overwhelming but it's also necessary to keep forward movement. I think Death Thing is perfect for the screen and I'm talking to a lot of folks on how to get that done.

I'll be in Long Beach on Sunday, October 4th, at Gatsby Books for a Death Thing release party but I'm also releasing my new chapbook, Cat Food, there. You can get both books here. 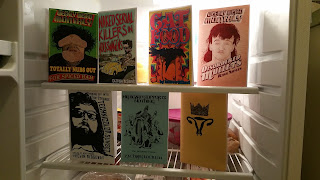 I'm extremely grateful to the city of Austin and Texas in general. I don't know that I'd be writing as much as I am today if it wasn't for a rather sudden move to Texas. Texas revitalized me. It threw me around and sent me to some depths in the beginning, sure, but it was for the best.

I'll be updating this blog more. I'm terrible at internetting.
Posted by Andrew Hilbert at 2:30 PM No comments: