The Werewolf Dentists From Hell

In honor of Halloween and of my root canal horror story, I am posting my story THE WEREWOLF DENTISTS FROM HELL for free. Trick or treat. It was originally published in a Halloween anthology from horrornovelreviews.com. 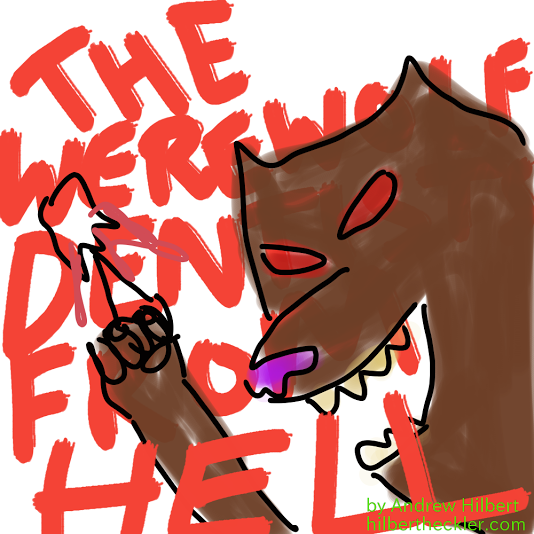 THE WEREWOLF DENTISTS FROM HELL
by Andrew Hilbert

“Aren’t you a little old to be trick-or-treating?” Carl asked the two masked men at his doorstep.

“Just give us some fucking Tootsie Rolls,” one of the men said. His voice was low and gravely and his eyes were bright red underneath his mask.

“Wh-what are you supposed to be anyways?”

They stood there. Their faces were covered by werewolf masks but they were also wearing scrubs and stethoscopes dangled around their neck.

“Dentists from Hell,” they both said and pushed their way into Carl’s house where his wife sat around the television watching The Simpsons.

“Television rots the brain, moron,” one of the men said.

“It’s a family tradition! The kids go out and get candy and we watch The Simpsons. What’s so wrong about that?”

“Turn off your porch light. You’re done giving candy to kids,” one of the werewolf dentists from Hell said.

Carl, realizing that he had no choice, obeyed.

“And turn off that noise!”

Carl turned to his wife.

“Honey, please turn off the TV. These nice dentists from Hell have something to say.”

Betty turned off the TV.

The dentists from Hell looked at each other. Beneath their masks, they smiled.

Carl nodded and pointed to his favorite reclining chair.

“You got some duct tape?”

Carl nodded and pointed to the kitchen.

“You got any Tootsie Rolls?”

“Only Butterfingers and Twix, king sized,” he said.

“Fuck!” one werewolf yelled. “I wanted the Tootsie Rolls.”

“Go get the duct tape, you son of a bitch!” the other said.

Carl could feel a steady stream of piss roll down his leg. It showed through his khakis.

“Get the fucking duct tape.”

Carl nodded and waddled to his kitchen. With each stride, he could feel his pant legs sticking and unsticking to the hairs of his legs.

“Kids ‘round the neighborhood must love your house,” one of the dentists said to Betty.

“They do, they sure do. We always give out the good stuff.”

Carl came back with the duct tape in his hand.

“Wh-what are you planning to do?”

“Sit down and shut up.” The dentists from Hell pointed to the recliner.

Carl nodded and sat down.

One dentist pointed to Betty.

“Betty, I’m Pavlovius and this is my partner, Theolonius. Please duct tape your husband’s hands and feet to the La-Z-Boy.”

Betty got up and brushed the popcorn off her sweatshirt. She grabbed the duct tape from Carl’s hand and started to bind him to his beloved recliner.

“Pliers,” one of the dentists asked. The other pulled out some pliers from his trick-or-treat goodie bag.

The pliers were rusted and disgusting.

“Open your mouth or we’ll lengthen your lips.” He pulled out a knife.

The dentist from Hell put the pliers in Carl’s mouth, grabbed his front tooth, and pulled. Blood flowed like the corn syrup surprise inside a Gushers candy.

“You’re rotting children’s teeth,” the dentist from Hell said and plucked another tooth out. “You’re destroying the mouths of babes!”

“You’re giving into the sugar industry like slaves!” the other dentist from Hell said as the pliers continued their work.

Carl screamed as blood sputtered out of his mouth and dribbled all over his shirt and khakis.

In no time, Carl was toothless. His mouth was a gaping wound of blood and spit.

“This is the future of all the kids you’re feeding king sized candy bars,” the dentist with the pliers said as he grabbed a compact mirror and held it up to Carl’s face.

All Carl could see was a mouth bleeding all over itself in the mirror. He couldn’t help but cry.

The pliers fell to the ground. The werewolf dentists from Hell looked at each other.

“We didn’t even think of that.”

“You’re the guy who gives us business.”

The werewolf dentists looked at their feet and shook their heads.

“We’re really sorry about this.”

“Here’s a business card for a real good oral surgeon. He can fix you up with teeth implants or dentures or whatever you prefer.”

They handed him a card.

“Shit,” one of them said. “We’ll just turn on the porch light on our way out.”

They backed out of the house and closed the door behind them. The porch light was on.

Carl sat there, still bound, as Betty collected his teeth from the ground. 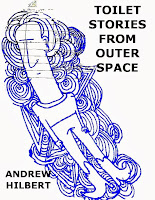 Posted by Andrew Hilbert at 7:00 PM No comments:

Reviews and other such nonsense!

I will have you know that I have been keeping up with the Simpsons and there will be reviews and thoughts posted soon but what everyone really should be watching right now is the new season of South Park.

Some friends came into town for a bachelor party. Two friends are getting hitched this year and, luckily for me, they decided to come to Austin to celebrate. I got to catch up with everyone and one of those friends informed me that South Park this season was killing it. He was right. I work in the service industry by day and by night and the Yelp episode is spot on. Do yourself a favor and watch it.

Anyways, I haven't been posting recently because I'm going through quite an ordeal with my tooth after a root canal on top of getting sick at the end of October every year.

Here's a roundup of more recent reviews and mentions of Death Thing:

The Elements of Revenge Lit 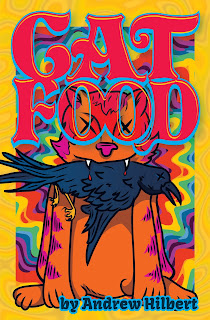 You can always purchase a signed copy of any of my work through the Weekly Weird Monthly here.

It's Halloween time, bozo. Here are some links to some of my freely available horror stories.
Posted by Andrew Hilbert at 1:10 PM No comments:

The Simpsons and How They Embiggened Me: Simpsons Season 27 Premiere

If the rest of the season is like this, it's bad news.

Last thing's first. It ends with a referential joke that is mind boggling if you aren't aware of the reference. Early Simpsons episodes referenced and parodied and it wasn't necessary to even know what was being referenced or parodied to laugh. Sure, you might laugh more if you knew the reference but you'd still laugh because the Simpsons was funny.

The Simpsons excelled at referential and self-referential humor because the joke didn't live and die on the reference. The joke was funny regardless of the reference. There's this whole genre of humor that is solely referential. It's not funny on its own. Sorry. Randomly spewing a piece of TV trivia is not funny regardless of how many people put their nose in the air and laugh as their eyes dart around looking for the people who don't get it. There's nothing to get.

I GOT THE REFERENCE, THOUGH! IT WAS ALL A DREAM IN AN EPISODE OF GIRLS AND HANNAH HORVATH SAYS SOMETHING FUNNY ABOUT BROOKLYN.

The episode, surprisingly, started off good. Homer and Marge have had serious marital problems throughout the series. I did not understand the uproar over the episode before it aired because this is a tried-and-true episode formula for the Simpsons. It's not as common as a Sideshow Bob formula but it's still common throughout Simpsons' history.

There's really not too much to say about the episode other than it lacked jokes. Bart was also weirdly psychopathic. He's always been a brat, he's always been vaguely psychopathic, but I don't recall him ever trying to kill his father and have that be played up for laughs. It was bizarre. It was too over the top, even for Bart.

The drug scene wasn't super visually interesting. Homer's already had some great drug episodes (when he meets the coyote voiced by Johnny Cash, when he starts smoking medical marijuana) and this one just seemed to go through the motions. Maybe it was a deeper commentary on millenial culture - we're so boring that even our drugs produce nothing more than minute long filler in a cartoon. I doubt that, though.

The episode was cheap and used an Inception-like series of dream endings to quickly wrap up a story that should have never been unwrapped.

Hopefully this isn't a sign of the rest of the season.
Posted by Andrew Hilbert at 2:50 PM No comments: