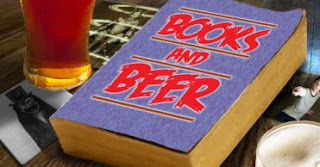 Big, cool stuff right here! Zach Chapman, Miguel Villa, and I started a podcast called Books and Beer. Each month we explore different subgenres/tropes and read a shit-ton while drinking beer. It is part of the One Of Us podcast network and will be a monthly show! The first episode is haunted houses. Take a listen on over there now!

Also! The new Deerman episode is up for patrons. Non-patrons get it next week! Become a patron today. 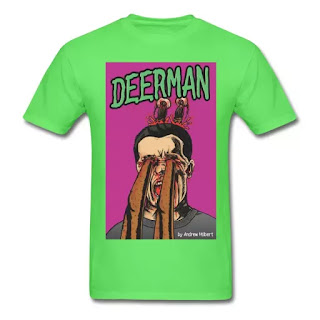 Just in time for the holidays, buy somebody you love or are indifferent towards a Deerman tshirt. Get it here.

There's more to say, folks. I just wanted to update you with that stuff. Until then, please enjoy a Family Circus cartoon. More to come shortly.

Posted by Andrew Hilbert at 4:08 PM No comments:

Game 7. The Dodgers. The World Series.

This World Series has been absolute magic.

These two teams have gone head to head, back and forth, trading leads, emptying out their tanks every night and it has been euphoric to watch as a fan. 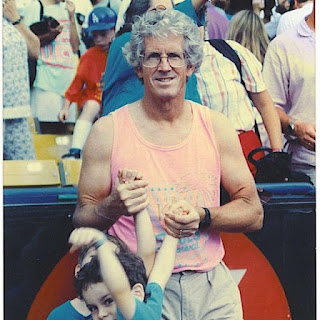 My grandpa, Larry, was an avid baseball fan. He had season tickets to Dodger games and he and my grandma, Donna, would take my brothers and I often. When we were in fifth and sixth grade, discovering music, we would try to sneak AM/FM Walkmen into the game to try to liven it up with Power 106 or 92.3 The Beat. His rule was, if you're listening to anything but Vin Scully while watching the Dodger game, it's getting turned off.

We didn't think he'd actually check. But he did. And he turned it off often.

This is not a bad memory. This is a good memory. He wasn't religious but he understood the merits of boredom. You have to be present for life's moments. You also don't want to get hit in the face by a foul ball in the orange lodge seats, right field side.

Just how often my grandparents picked us up for games is astounding when I think about it. So much of our young lives were spent at Dodgers games. I'd get ice cream malts and peanuts, Dodger dogs and more peanuts, cotton candy and more peanuts.

My favorite players moved from Orel Hershiser (that one was easy, I was 2 when he was the hero and the glow never left him), Eric Karros, Mike Piazza, and Raul Mondesi over the years. I saw myself as a catcher when I was a kid even though I never played the position. I was a wimp. I couldn't handle the stress of guarding the plate. I was so untalented defensively that I was relegated to right field or left field where I would just throw my mitt in the air out of boredom. That's why I chose Raul Mondesi as my favorite player as my Little League career stagnated. I was a decent hitter, though. So was Raul.

When my grandpa was killed by a drunk driver in August of 1998 while my brothers and I stayed at his house, the Dodger game attendance slowed down. We no longer had season tickets but we continued to watch on TV and listen on the radio. Every year was our year. And we came close a couple of times. We continued to go to Dodger games as often as we could which wasn't very much. 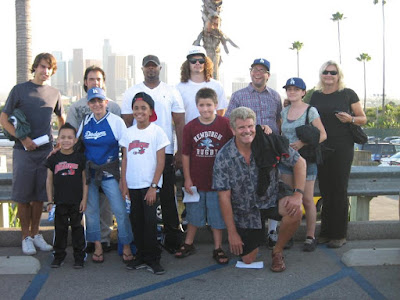 When my wife and I first started dating in 2011 on our very first trip back to California to visit my family, we went to a Dodger game. I remember saying to her jokingly, "I am okay with you not being a Lakers fan but please, please, please be a Dodgers fan." I bought her a Dodgers hat before that trip.

We're married now and she regularly updates me on the score when I'm at work and don't have time to devote attention to games. She's become quite the Dodgers fan.

This year my mom texted my brother to tell him she bought plenty of beer for game 1. He didn't have to buy any. If you know my mom, you know this is crazy. She doesn't drink and she certainly doesn't buy beer for anything. When my brother got home to a house filled with 10 people, my mom had purchased a 6 pack. Baby steps. 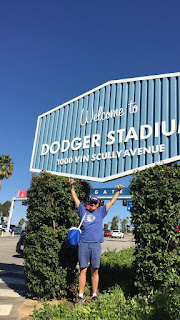 When I was in college, the bunny ears would be tuned to Dodger baseball constantly. James Loney was group favorite at the time. We were good in those years, too. Those years felt like our years. Elizabeth, Jack, and I watched a hell of a lot of them in our apartment on 10th and Stanley in Long Beach with our friends coming in and out to drink cheap beer and play ping pong. Shortly after college, I remember my friend, Mark, calling me to tell me to turn on the game. The game was already on, duh. He was behind home plate waving at the camera. I don't know how the hell he got those tickets but I know I took a picture of it on some janky digital camera that is lost forever.

This year, I went to a Buffalo Wild Wings for the NLCS because I couldn't be sure any local joints would care about the Dodger game nor could I be guaranteed anyone knew how to change the channels. I'm positive that's part of the training course at Buffalo Wild Wings. Nina and I were the only people watching the biggest screen as the Dodgers put away the Cubs.

Now picture this: a man freshly shaved with a brand new devastating mustache with his wife over four or five empty baskets of chicken wings wearing Dodger blue as the rest of the crowd watches the Kansas City Chiefs vs. the Raiders. Picture this man weeping in joy at a gosh darn Buffalo Wild Wings. It's pretty sad, right?

Now picture this same man in his Dodger blue pajama pants, hunched over a keyboard, weeping in joy at the mere thought of tonight's game 7.

Win or lose, this series has been incredible. This series encapsulates why baseball is America's sport.

Post-script: one of my first decent stories featured Orel and Kershaw, named after two Dodgers from different eras. Read it here
Posted by Andrew Hilbert at 11:53 AM 1 comment: