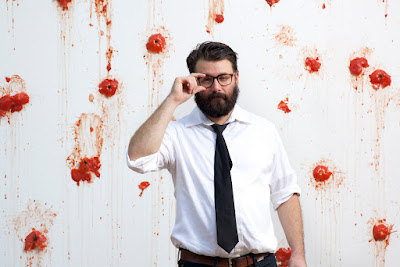 Andrew Hilbert is a writer living in Austin, TX. Andrew Hilbert is from Long Beach, CA. He, along with three others, founded Beggars & Cheeseburgers magazine in Long Beach shortly before moving to Texas. It lasted three issues but in its short run it had over a hundred subscribers. In Texas, he began freelance writing for multiple companies and contributing articles to Austinist.com. He had a short run as a columnist at Out of the Gutter Online and ran the blog The Cheesepaper. He was a fiction editor for Foxing Quarterly for three issues and co-founded an audio short story website, Slagdrop. Andrew and longtime friend and collaborator, Jack Arambula, are also working on a monthly comic series called The Weekly Weird Monthly.

Andrew Hilbert's poems and stories have been in numerous journals and websites worldwide since 2009 with many more forthcoming.

He is currently working on a musical variety show titled Margaret and the Infestation, writing the intended novella Death Thing, and putting the finishing touches on his forthcoming short fiction chapbook, Toilet Stories From Outer Space.

Much of his work can be purchased here.