The Simpsons and How They Embiggened Me: Season 1, Episode 1

Read the introduction to this series here.

A good friend of mine came to visit a few months back. He and I had written and collaborated on a lot of things as we grew up. He was a pioneer of the early "blog" days, back when the sites were known as E&N sites (everything and nothing). We got to talking about humor and what makes us laugh. He said the internet informs so much of our generation's humor, which is true, but I'd argue that the Simpsons has much more cultural weight over our senses of humor. I'd say that the Simpsons helped construct what we see as internet humor but I'm not smart enough to write about that shit. 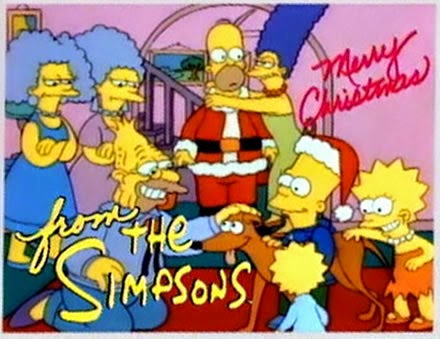 The first thing you notice is the super low voice of Homer Simpson. It's still Homer but it's crazy how much his voice has changed since the first season. I've started watching the newer episodes this season and I've found that many characters voices are going through slight changes. I can't put my finger on it but Moe and Mr. Burns's voices are slightly different. The voice actors age, the characters don't.

Why do I like this Simpsons episode so damn much? Why do I hold it up as the standard-bearer of all Christmas episodes?

It's simple. There's a hope against hope theme that pervades all of the early Simpsons and the very first episode displays that in full force.

Bart, with the best intentions, decides to get a tattoo of a heart with the word "Mother" in it. He imagines his mother loving it. He gets to please his mother and look like a tough guy. Every kid's dream. Of course, it doesn't go as planned. That's the first instance of hope against hope. Bart is trying to be his own person yet he knows a tattoo would displease his folks so what does he do? He chooses the least offensive tattoo he can. Not only is it the least offensive but it conveys his love for Marge. It doesn't turn out the way it was supposed to for Bart. 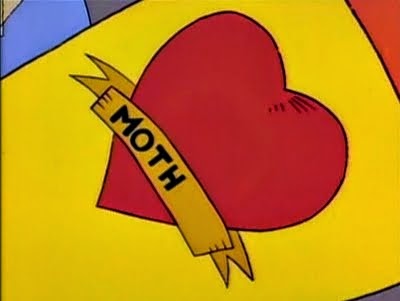 Homer won't be getting a Christmas bonus, Marge has to spend the Christmas money on removing Bart's tattoo, and just like that the Simpson Christmas sucks. Homer gets a job working as a mall Santa after Barney, the town drunk, drunkenly tells Homer they're hiring but they're selective. That's probably the best joke in the whole episode. 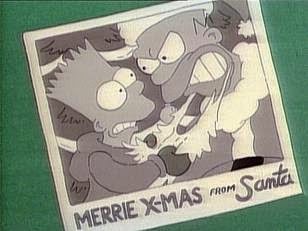 La-di-da, time goes on. Homer gets his paycheck after Bart tugs at his beard and discovers his dad is the mall Santa. "You must really love us to sink so low," he says. That's probably the best joke in the whole episode. Homer's paycheck is only $13 after taxes, training, Santa suit, beard rental, and Christmas club. It's over for Homer until Barney invites him to the dog racing track. 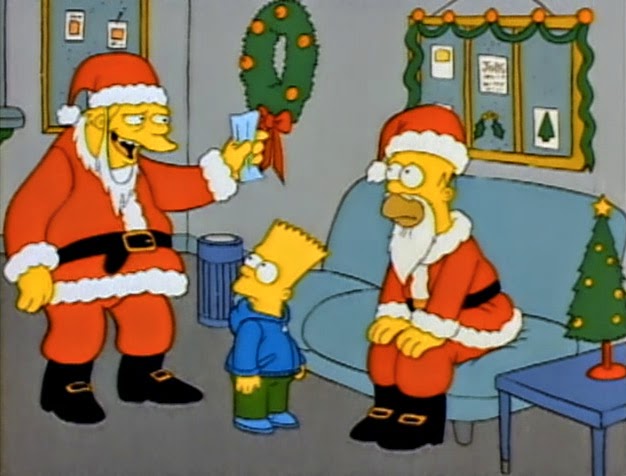 Barney wins, Homer loses the bet after going with his gut for the dog named Santa's Little Helper. Bart's declares that TV has misled him in hoping for a Christmas miracle to save Christmas. 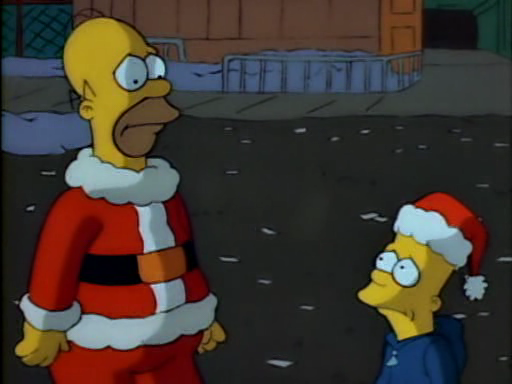 The racetrack owner then kicks out Santa's Little Helper who runs into Homer's arms. Homer says, "He's a loser. He's pathetic. He's a Simpson." This, my friends, is what it's all about. They are losers, they are pathetic, yet they keep on going. Homer goes home thinking Christmas is ruined but as soon as the dog runs into the house with Bart, everything is all right.

Homer enlisting his son to look for a winning ticket in the parking lot after the race is more touching and more meaningful than George Bailey thinking about killing himself. Homer, knowing damn well nobody's thrown a winning ticket away, still goes through them with his son begging fate for a change of circumstances. He is forcing his son to take part in his display of defeat. The Simpsons is far from the fatalistic world that Matt Groening created with Futurama. The Simpsons fight the inevitable, no matter how pathetic, and still lose by the standards of their own expectations but they gain something greater.

They weren't trying to win the dog, they were trying to win money to buy presents. They never got the money. They failed. In Homer's refusal to see the reality of his failure, he stubbornly looks for a miracle. The miracle appears and he can't even recognize it. Bart has to recognize it for what it is. Bart was the one who said that TV failed him. It wasn't the ending our heroes worked for, it wasn't the ending the audience expected, but it was the ending that saved Christmas.

Looking back, I can't fathom a world in which the Simpsons got as much flack as they did. By today's standards, the Simpsons look downright Leave it to Beaver-y. It's all there, though. This is the first real glimpse of what the Simpsons would become - a realistic portrayal and unflinching satire of American society, pop culture, and family. 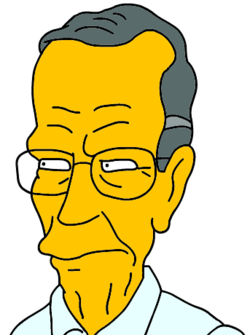 Homer is not yet over-the-top dumb. He's sweet, if not a little brusque and dense. It's clear he's not stupid. That stops being clear in glimmers around season 3 and more consistently after season 8.

Does anyone else think the tattoo artist is Comic Book Guy's brother? They look pretty damn similar. 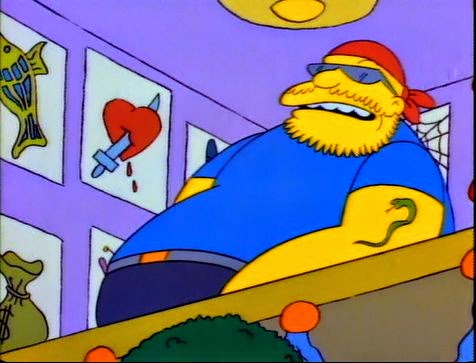 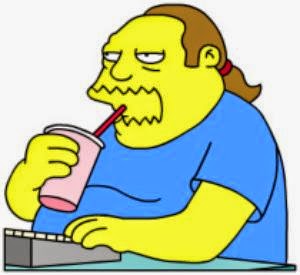 I guess everyone in the Simpsons look similar enough.
Posted by Andrew Hilbert at 3:00 PM

Email ThisBlogThis!Share to TwitterShare to FacebookShare to Pinterest
Labels: simpsons