It's resolution time for the world. It's a time where we all sit around the family table with a pencil in our hand writing down all the promises to ourselves that we're going to erase at the stroke of midnight on January 2018. 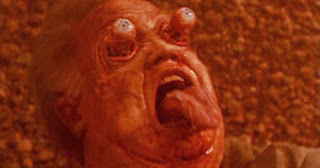 Don't believe the idiots on social media that will proclaim to live their best lives this year. That doesn't mean anything. They're going to fart themselves to death under a pile of Cheetos dust while watching MSNBC and getting a brand new hemorrhoid any time anyone mentions Bernie Sanders or Donald Trump or Hillary Clinton.

2018 is going to be more of the same folks. The same battles re-fought, over and over again, until we're blue in the face or until Donald Trump is Forevemperor of America or he is in Guantanamo Bay. Hell, maybe we really screw things up by having both!

I don't doubt anything anymore, folks. You tell me conspiracy theorists are going to deny the existence of an alien alloy and a government plot to cover it up once it's reported by the New York Times... wait, that already happened?

It's bizarro-planet folks. We're on Planet X and Planet X doesn't occupy a physical space, it just occupies the small tumor on our brain that's gone undetected for too long and will soon kill us all.

18. I promise never to lift my ass up when farting in the car while the heater is on and locking the windows to telegraph that I'm about to commit a war crime and blame it on the dog. I swear.

17. I promise that when I pick my nose, I'll roll up whatever I found in there and stick it behind my ear to chew later. I'll never do it in front of anybody again.

16. I'll always pick my dog's shit off my neighbor's lawn and put it in their mailbox. It's good for the environment.

15. When somebody tells me they like Dan Brown, I won't make fun of their taste in music to make them feel stupid about everything. (Hey! Robert Dean! It's not 2018 yet so take that!)

14. When somebody tells me their kid did something like put ketchup and mustard on something that those are natural condiments on, I'll stop saying, "Oh, but I bet you had to cut it up into little pieces so they don't choke. Not so fucking smart. Get out of my face."

12. Whenever somebody tells me P. Terry's is better than In N Out, I'll just tell the truth: "Our allegiances say more about the efficacy of corporate marketing than it does about our tastes. Sure, these companies are different in terms of size and scale but in the end, their goal is to separate us from our money to provide an addictive food with very little nutritional value. You can say "Go Local" or "In N Out pays their workers very well" but you can also just note that those are effective marketing tactics to reach a certain type of consumer. And it works. We are all slaves to the system.

11. I went to a Starbucks the other day because I had to. I was on the road and I wasn't driving and it was the only place to get coffee without pulling out Google Maps. I looked at their espresso machine. The only human interaction the barista has with the machine is pushing a button and dropping a cup underneath it. They don't weigh their beans, they don't tamp, they don't do anything. It's like watching a glorified Keurig machine. I looked at the beans. They were dark and oily. I had a sip of my coffee. It tasted like California wildfire. It's also considerably more expensive than decent coffee. I don't get it. But this is the future we are living in. Keurig machines are creating overpriced coffee so that people can wear t-shirts that say, "Don't fuck me until I get my coffee."

10. Target now forces you to go into the self-checkout line. There are big monitors above every register and it has a blink graphic that says, "Monitoring in Progress." I would take selfies all the time in it because I thought it was hilarious. Then I looked at Instagram and everybody fucking does that. We're all joking with a faceless corporation that only asks of us our obedience.

9. I promise never again to ask somebody who has a beard that comments on my mustache, "Yeah, when are you going to take off your training wheels?"

8. I promise never to skip a number in a long list just to get to the end more quickly.

6. But that is next year. This is 2017 and anarchy still reigns supreme.

4. When someone wears a Hawaiian shirt I will stop saying, "I didn't know you played bass in a ska-punk cover band," or, "Congratulations on the promotion to bowling alley assistant manager."

3. I canceled Spotify because it's a terrible way to listen to music. I find myself listening to the same song over and over again and it is mind numbing. Nothing is important when everything is available. I will never listen to music again. I promise.

2. Who are the fucking people in the world that get on their knees to lock a public restroom stall from the outside so that nobody can walk into it? I work at a bar/coffee shop and this happens often enough to wonder if this is part of the psychopath test. I'm going to find you in 2018.

Listen to me read an excerpt from my work in progress, The Pasternaks, here.

Books and Beer: Episode 2 is here.

Posted by Andrew Hilbert at 9:21 AM