This is the second year in a row that I've been able to get a film wristband and I'm glad I did. Austin is the live music capitol of the world but with my creaky knees, I much prefer Austin's vibrant film culture these days. Plus, living in Austin provides for seeing great music all the damn time. The film fest is where it's at.

The Internet's Own Boy was the first movie I saw this year. It was a  documentary on the genius who ended his own life due to an overreaching and predatory government  prosecution against him. I know that the world is a complex place and our laws aren't keeping up with the evolution of our society but the biggest and best thing that I came away with from that movie was the triumph of the human spirit and the beauty of creation in the face of forces determined to take you down. As a documentary, the movie felt a bit too much like a dry made for TV production but the subject of the film, Aaron Swartz, was such a captivating figure that the shortfalls of the production were easily forgotten. The most illuminating quote came from Swartz himself. The internet is not only a great tool for creation and human connectedness, it is equally a tool for oppression and it will always possess that dual nature. The fight is never over.

Next on the list was the premiere of Cosmos with Neil deGrasse Tyson at the Paramount theater. It will be on Fox tonight but the only reason I was willing to wait in line for it was to see the man himself in person. He was drinking a Lone Star, not some fancy pants beer I'm sure he could afford. The man has taste. Watch the show tonight, it's great and quirky and will probably end up being a great cultural moment.

Yesterday Nina and I saw three flicks, two of which were good. The premiere of Robert Rodriguez's From Dusk Till Dawn was phenomenal. Judging from the first episode, the series is going to deliver Rodriguez style humor and violence, chock full of strained metaphors and brilliant gabbing between spaghetti western kills. I'm not sure it'll be the next Breaking Bad or anything like that but it's damn fine TV and does enough to wash away the bad memories of the sequel to the original film.

Break Point felt like an imitation of Judd Apatow's brosweet style of comedy but never quite got the tone right. There were some bright spots during the flick but I couldn't ever get into it.

So far, Oculus by Mike Flanagan stole the show. It's always the horror movies that I come home raving about. My style of horror is more schlocky, slasher, and humorous. Oculus was none of these things but holy cow, man, it was the scariest movie I've ever seen. I'm an adult and right when I got home I had to turn on all the lights in my apartment and shield my eyes from any mirror. The movie never let up on you and the feeling of dread was manipulated masterfully. If there's any movie you have to see in theaters, it's this one. It is a masterpiece of horror cinema that will scare the living shit out of you. 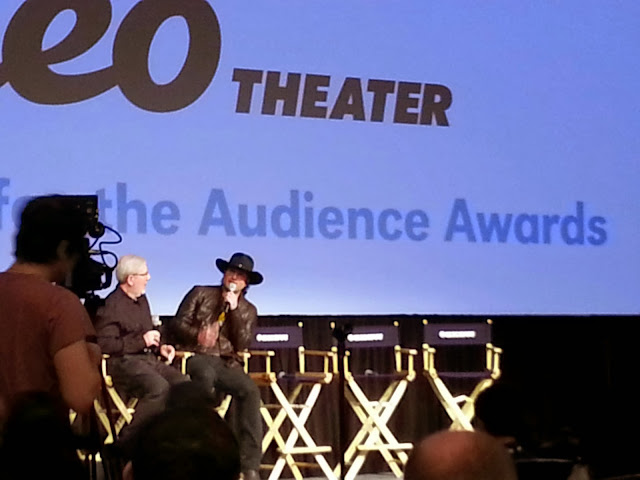 Posted by Andrew Hilbert at 9:33 AM